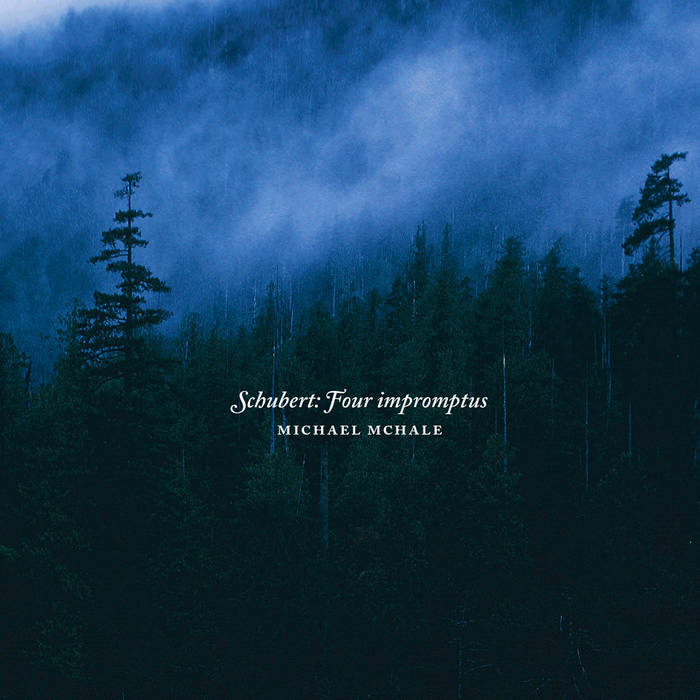 Franz Schubert’s Impromptus, Opus 90, were composed in 1827, the year before the composer’s death at the age of 31. This record juxtaposes these limpid, yet emotionally complex piano pieces with companion interludes by three Irish composers.

Simon O’Connor’s Self portrait lovingly traces back over the shapes of the first impromptu, whilst at the same time interpolating strokes that are more typical of his own style.

Was du mir warst (“what you were to me”) by Benedict Schlepper-Connolly takes its title from a letter that Schubert wrote in his final days. Rhapsodic and intimate, the music is constantly reflecting back on itself, yet always tumbling forward.

With dark colours, saturation and a sense of getting lost, Garrett Sholdice’s The dreams flow down, too refers to Schubert’s song Nacht und Träume (“night and dreams”), both in its title and in the quoted music of its ending.

“I have known and loved these impromptus since childhood, and I was eager to record them in a new, unique context,” says Michael McHale, whose sensitive performances allow our perceptions of what is familiar and what is strange to shift. We become immersed in a new world: expansive, dark and organismal.

Belfast-born Michael McHale is one of Ireland’s leading pianists. Since completing his studies at Cambridge University and the Royal Academy
of Music, he has developed a busy international career as a solo recitalist, concerto soloist and chamber musician. He has performed at many important musical centres including Suntory Hall, Tokyo; Lincoln Center, New York; Symphony Hall, Boston; Konzerthaus, Berlin; Pesti Vigadó, Budapest, and the Ushuaia, Chopiniana and Tanglewood Festivals. Michael’s debut solo album The Irish Piano was selected as ‘CD of the Week’ by critic Norman Lebrecht, who described it as “a scintillating recital ... fascinating from start to stop”, whilst Gramophone praised “the singing sensibility of McHale’s sensitive and polished pianism”. michaelmchale.com

Ergodos is a record label and production company based in Dublin run by two composers, Garrett Sholdice and Benedict Schlepper-Connolly. Ergodos’ curation frequently presents new and old music within context of a single idea or theme, with previous projects including I call to you (based on the music of J.S. Bach), All the ends of the earth (built around the music of medieval master Léonin, and Songs (a celebration of 800 years of song). ergodos.ie