The feeling of remembering 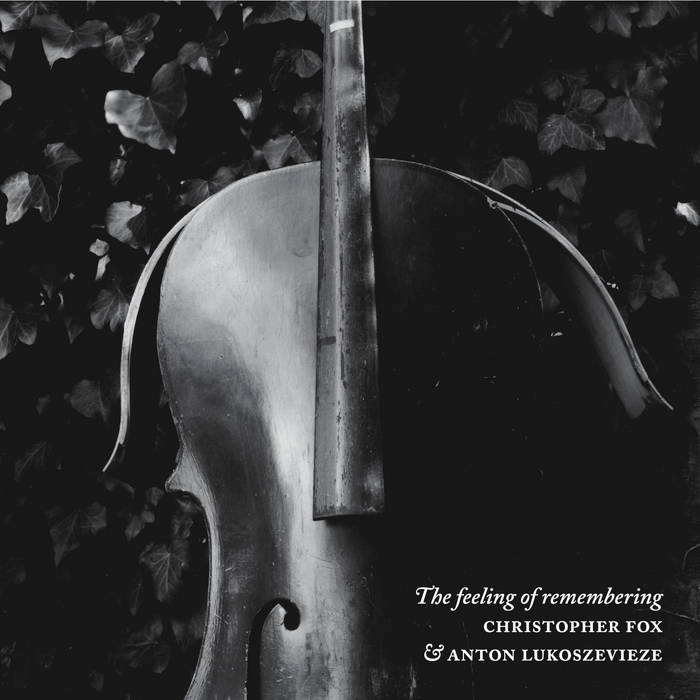 A luxuriant set of recordings, The feeling of remembering (released on CD) and re:play (released on vinyl), present music for cello by the singular English composer Christopher Fox. Both formats share much of the same music – but each format frames the material in its own unique way, making for a beautiful, mutually enriching, collectable pair. Experimental music luminary Anton Lukoszevieze’s playing is in sharp focus here; the cellist also provides the iconic cover photograph.

Memory – “what we remember and how we remember it” – is the over-arching theme here. The feeling of remembering re-occurs across the CD like a re- encountered memory – each time the same, each time different. The dark road – “a memory of the Irish community in Leeds” – is also involved in recollection. The CD version of this piece is hauntingly underscored by voices of men who came from Ireland to Leeds to build the English motorways. Fox describes re:play as “music which gradually forgets itself – a briefly sketched melody that can never be recalled, in spite of recordings which remember what has just been forgotten”.

Other works find inspiration in the rich qualities of the instrument, or an aesthetic question. Susan’s purple delights in the full-throated voice of the cello, whilst Arc re-imagines the instrument as a hurdy-gurdy. The principle of design takes its title from the writings of late-nineteenth-century writer and feminist Charlotte Perkins Gilman: “I know a little of the principle of design, and I know this thing was not arranged on any laws of radiation, or alternation, or repetition, or symmetry.”

Christopher Fox (b.1955) is widely regarded as one of the most individual composers of his generation, often working at a tangent to the musical mainstream. He has chosen to base his compositional career around close collaborations with a number of performers, including the instrumental groups Ives Ensemble, knm Berlin and Apartment House, and the vocal ensembles The Clerks and exAuDi. His work regularly extends beyond the conventional boundaries of the concert hall and includes the radio piece Three Constructions after Kurt Schwitters, the evening-long ensemble installation, Everything You Need To Know, and the music-theatre documentary Widerstehen. He lives in London with his wife, the writer Susan McNally, and is Professor of Music at Brunel University.

Cellist and inter-disciplinary artist Anton Lukoszevieze (lu-ko-shev-it-sheh)
is one of the most diverse performers of his generation. Notable for his performances of avant-garde, experimental and improvised music, Lukoszevieze has given many performances at numerous international festivals. From 2003 until 2014 he was a member of the Zeitkratzer ensemble. He is noted for his use of the curved bow (BACh.Bogen), which he is using to develop new repertoire for the cello. In 2012 he was awarded a Royal Philharmonic Society Award for outstanding contributions to chamber music.

Recorded in All Saints’ Church, East Finchley, London, on 11 and 12 December 2014. Mixed and mastered in Dorset in April 2015.
All tracks composed by Christopher Fox and published by Fox Edition.